The Farm – Farm Vacation In NC

The story of Broadwing Farm is the story of three generations of a family living together.  We moved to Hot Springs NC in the fall of 1992. Our plan was simple on the surface, “throw away your TV, eat a lot of peaches”, have children, stay close to the land and start an organic farm. Twentyfive years later, we’re still tweaking that plan. It has been a wonderful adventure, a homesteader’s dream that has evolved into sharing our beautiful organic farm with mountain getaway cabins and hot tubs. Our children, Josey and Eliot were born here, and now they are grown. Grampy Bob and Gramma Carol (Pete’s parents) have been with us every single step of the way on the Broadwing Farm adventure. 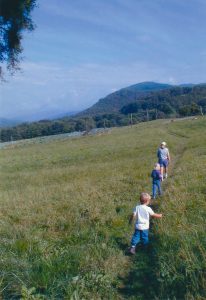 For several years after we settled here we energetically pursued organic farming. We learned a lot. Looking back, it’s hard to believe we lasted as long as we did. It takes a really big truck full of greens to buy a couple bags of groceries. We spent our days tending greenhouses, fighting weeds and pernicious insects, disease and drought, not famin but sometimes locusts. It was exhilarating and exhausting. We sold our produce at several Asheville tailgate markets every week, served more than a few local restaurants and had a CSA for four years. Mary was known throughout the region as the sticky bun woman, because of the beauties that she baked and sold at market. 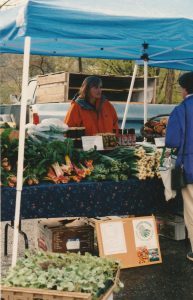 We traded sticky buns for medical services more than once. It’s a tough way to make a living and although it about wore us out, it provided us with loads of gardening skills, great friends and wonderful memories.

But by and by our livelihood began the transition from organic farming to cabin rentals. This was a natural choice when in 1999, somewhat randomly, we discovered Broadwing Farm was sitting on naturally warm mineral water, one of only two known properties in Hot Springs NC to have the  mineral waters! Our farm internship housing cabin was transformed into the Pine Cabin, our first venture into vacation rentals. The Poplar Cabin and Cedar Cabin followed and were done by 2006. The naturally warm mineral water has always been the biggest draw to the small town of Hot Springs and in 2010 we stopped doing tailgate markets altogether. The transition was complete. As an aside it is noteworthy that all the construction for the cabins was done “in house” so to speak. Farming has never been super-lucrative in these mountains, and this continues to be true, so I (Pete) worked winters in carpentry. The arc of my education as a builder can be seen in the construction styles of the cabins. When we built the Pine Cabin, in 1993, I was reading chapters about framing windows the night before I framed my first window. It was built with green lumber, youthful determination and naivete, but the results are charming and reflect a stage in the history of the farm that, like youth, couldn’t be recreated. The Poplar and the Cedar Cabins are built with more standard construction styles but all 3 cabins share a large portion of their lumber being sawn on our own sawmill here on the farm.

This brings up another important piece in the history and development of Broadwing Farm: the sawmill! Shortly after we moved here, Grampy Bob’s brother  (Uncle Ed) let us know that he was sitting on an old sawmill that had never even been un-crated. He wondered if we would be interested in buying it for a song. So unfolded a long and important chapter in the Broadwing Farm story.  It was a circle mill, not the new fangled easy to operate band-saw type sawmill . It was essentially a forty inch circle of steel with teeth and a lot of other moving parts to feed it wood. Operating a circle mill is as least as much art as trade, and here fate intervened in the form of Woodrow Ramsey, a 90 year old neighbor who had run a mill in Hot Springs, just down the road for decades. He was a real sawyer. Sawmilling was in his blood and it took no effort at all to get Woody to come over and get me going on my new mill. He loved it. After years of milling I can say from experience that sawmilling really does get in your blood. Woody would get a far away look in his eyes as he let the cants (a cant is a log that has been sawed to square) power by  under his hand. Woody has long since passed away. My favorite memory of Woody is when he would come over and see some of my lumber or my new construction and he would run his hand over the radial marks on the face of a board and frown a little and say with his high pitched Madison County draw, “when you gonna fix that sawmill, Pete?” The twinkle in his eye eventually betrayed he was just ribbing me, but also letting me know that I still had a long way to go. I probably never got there before I let the sawmill go, but in the meanwhile I was able to saw patterns for all three of my cabins and my parent’s house as well. Without that Belsaw 40” circle saw, Broadwing Farm would be very different place, that’s for sure.

So the cabins, with their natural mineral water hot tubs, have been complete since about 2006. 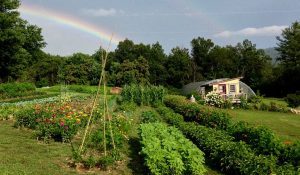 We still have large, beautiful kitchen gardens every year along with a growing u-pick blueberry orchard of 250 bushes. We really still think of ourselves as organic farmers who have rental cabins with hot tubs. We always try to grow an abundance and share with our guests. Meeting guests in the garden to share food is one of the best parts of our job. Even after all these years and many adventures, the beauty of this place still blows me away. Meeting our guests in the garden with the Blue Ridge Mountains, the French Broad River, and the scenic town of Hot Springs NC all in view is my favorite scene from the next chapter in the story of Broadwing Farm.